Just thought that I would give a quick update on what progress has happened at our house during the last several weeks.  As you can imagine the holidays basically brought everything to a halt and if it wasn’t the holidays it’s been the rain.  However the rough plumbing was recently completed and just last week our GC finished installing the tubs.

We were originally going with a standard tub in all of the bathrooms, except the master, however our GC, amazing guy, was able to secure these awesome Kohler Devonshire tubs which have a 20″ depth and gave them to us for the same price as the standard ones. This guy is incredible.

The hole(missing concrete) in the above picture was where our former GC originally put the plumbing…in a bedroom…bright guy huh? 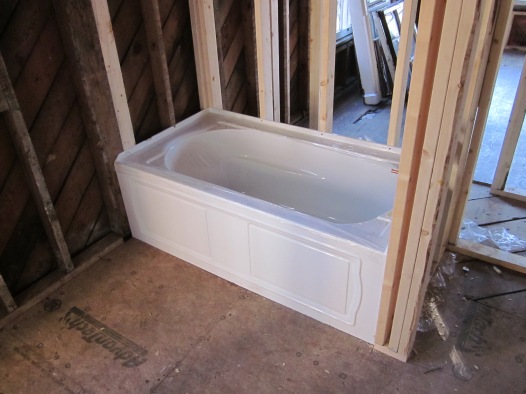 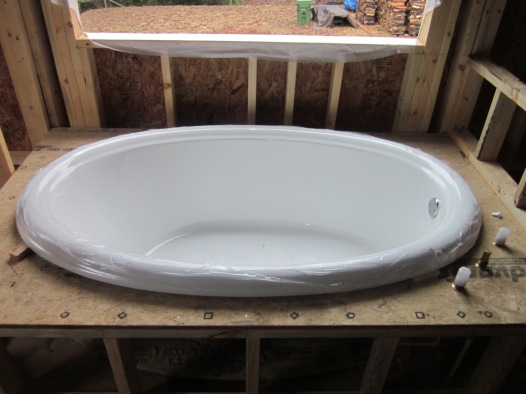 It’s funny, it will be a while before the house is ready and we’re able to actually utilize the tubs but it’s still pretty exciting having them installed.  Plus, it’s the first time I’ve seen the boys excited about taking a bath – we’ll see how long that lasts.

The holidays are behind us and even though we have rain forecasted throughout the end of this week I’m hoping for good weather in the near future…we still have a long way to go.

We went back to Bottega to look at the slabs Julie picked out for the kitchen.  Damby Mountain White Marble, I know it has to be a little over what we were budgeting but she’s done an amazing job staying at or below budget for everything else so hopefully we’ll have enough cushion to absorb the extra expense.  YOLO, right?

Due to all of the delays we did end up losing 1 of our 3 slabs that we had put on hold but we’re hopeful that 2 will be enough.  Plus, we would love to have a wood top for the island in the kitchen but that is super expensive!!!  I wish that we could find some reclaimed wood somewhere but I’m sure that it would still be $$$$.  Last comment for the day, I was totally blown away by Bottega’s selection, not the quantity but the actual pieces.  The slabs are  like God’s paintings, absolutely amazing and simply beautiful.

I went with Julie this afternoon to go back and look at a few slabs she had selected for the kitchen at Bottega Stone.  Definitely not something that I find very interesting but I love what she picked, Mountain White Danby marble.  I’m a little concerned about the fact that it’s marble and we have two boys but it’s supposed to be less porous than traditional marble.  It’s more expensive but we saved money on clearing the property so that will help to make up the difference.  Plus I love to see Julie getting so excited about the house.  It’s been a hard year for her and even though we have been experiencing some pretty significant setbacks with the construction it’s great to see her having some fun.

They were going to pour the slab today but for whatever reason they didn’t.  GC couldn’t tell us why but said that he’s “anxious to get started”.

The 4 of us (family) went up to Norcross today to look at slabs for our kitchen and bathroom counter tops.  Gorgeous stuff, amazingly beautiful but somewhat overwhelming.  I will say though, Julie knows what she wants and has a great eye.  The boys and I started to get a little bored at the end, Julie had fun though so that is what ultimately matters.

We received the revised kitchen plan back today from our designer and while we’re not there yet I feel that it’s getting closer.  We’re still trying to decide what to do with the kitchen island and whether to use marble or wood ($$$).  Who would have thought a wood surface would be so expensive?

Our GC said that we need to go by Specialty Tile to pick our selection, not sure why the change?  I’m sure that they’ll have the same selection but Julie did such a good job that if they can’t fulfill it then unfortunately we might have to go against our GC’s wishes.  At least it will give us the opportunity to go by and visit Builder Specialties and Fergusons to look at kitchen appliances again

We’re still trying to decide between a 36″ or a 48″ range for the kitchen.  We’re not big cooks so I don’t see a reason for the larger size, although I do agree with Julie that it would look great in our kitchen.  Big $$ difference between the two as well, this decision won’t be an easy one.

GC sent an email that they’ll be framing next week “come hell or high water” – love the attitude!!!

So Julie wanted me to meet her today at Traditions in Tile to see what she picked out.  Initially I wasn’t too excited about it but I have to say that her and Heather did an excellent job!!!  And… have I mentioned that she was under budget?  Excellent all of the way around!!

As for the check, well our GC called this morning wanting to know when he could pick up his check.  Wish that he communicated like this on a normal basis.  He was at my office within an hour – still couldn’t give me an estimate on when they would pour the foundation or when framing would begin.