If you’re somewhat familiar with our story and if you read any of my posts over the last few months you know that if we’re to complete our house we’re going to have to get creative and find ways to reduce some of the construction expenses.  When we were re-interviewing Contractors for our second go at this project a lot of them talked about how they were good at value engineering projects and how they would “probably” be able to find ways throughout the course of construction to lower some of our costs while not sacrificing our finished goal or the quality of it.  I’m sure some of them would’ve been able to do so but one of the reasons why we chose our current GC is because he actually provided us with true examples on the front-end of how he would be able to do it and deliver to us our dream.  From the bids we received he wasn’t the lowest in price nor was he able to get his bid as low as we were hoping but he assured us that he would continue to look for avenues where we could save money.

I was skeptical at first for a few reasons; the contract with our current GC is a true Cost Plus contract. Meaning, we pay our contractor for the actual cost of the material and labor plus a predetermined percentage of those costs which basically is his profit. My feeling was that because of this arrangement he had very little incentive to reduce any of the expenses because that would in turn lower his profit.  My second concern was just the simple fact that he was walking into a project that had challenges.  The house was built in 1927, so who knows what issues he might find when he starts getting into the original structure.  Plus, directly because of the “improvements” by our former GC our house now had structural issues.  AND we’d been told by all of the contractors we interviewed (I believe 11 total) as well as our structural engineer that if we didn’t want to compromise the quality of our home or somewhat drastically change our overall plan of the house, then directly because of these past “improvements” there would need to be adjustments made to our framing and roofing plan which would significantly increase the overall costs.

So my concerns seemed realistic, not only why would he look for options to lower the costs which would reduce his profit but how would he even be able to do so?  As stated above, we knew that going forward there would be extra costs associated with the construction, framing, roofing, etc…and we made certain that the quality of our current GC’s work was above par and that he wasn’t one to cut-corners – quality GC, sterling reputation, past clients give him nothing but praise – still just doesn’t seem possible.

Well our house is far from complete and fortunately  our GC has been true to his word.  At the onset of our project he took it upon himself to have our roofing plan redrawn.  Our original roofing plan had more peaks and valleys than the Himalayas.  The amount of lumber required was enough for a house twice the square footage.  By redrawing our roofing plan, while making sure that it didn’t change the street appearance of our house, or that seen by the neighbors, he was able to simplify it thus reducing the cost of lumber, shingles, labor, etc… At the same time he was able to find us a comparable shingle as to what had originally been spec’d which also helped to reduced some of the costs.  We still have a lot more ground to makeup but overall this attributed to a 23.6% REDUCTION in what was budgeted for roofing.  Of course I wish that would become a trend and we could reduce all of the expenses by 24% however I’m just grateful that he not only took the time to explore various options but even more so that he actually did it and lived up to his word.  Amazing guy, so thankful we found him.

A few pictures below of the shingles. Try to ignore the exterior of the house, the trim will be added shortly, as well as replacement of all of the windows and they’re waiting until the interior improvements are complete before they paint the bricks. 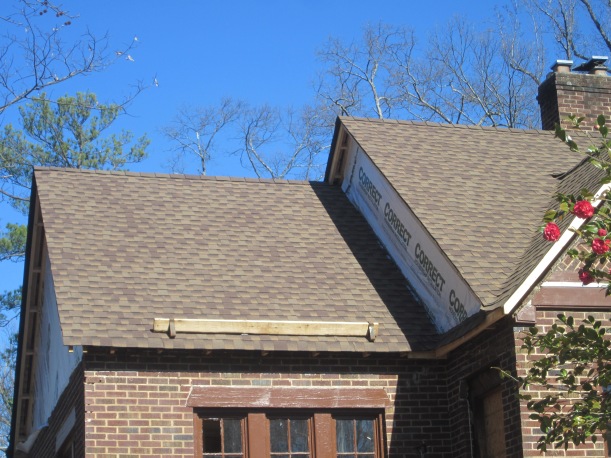 One piece of advice, I would strongly recommend that before the shingles are installed that you inspect a few of them just to make sure they’re the same color as to what you’re expecting.  While we confirmed that what was written on each of the packages was the same as what was ordered, we personally neglected to actually view the shingles and when we saw them on the roof we were somewhat disappointed as they seemed a little lighter in color than what we saw on the shingle board, as well as what we viewed online.  (GAF also recommends the above on their website)  They all came from the same batch however they’re definitely lighter, my hope is that once the trim is added and the brick is painted that less of the redness in the shingles will be highlighted and the brown will become more dominant.

Going one-step further, it would be even better if one was to use the same approach in selecting a shingle color as what is recommended when painting an interior wall.  If possible take a few shingles of various colors and have them placed on your actual roof so you can get a better idea as to what you’re getting and how the sun might alter the look/color.  Sample boards aren’t always accurate and I’ve been told that not everything you read or see on the internet is completely accurate as well.